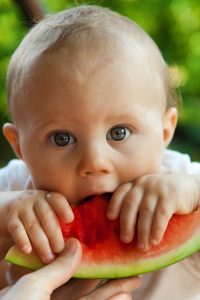 This is an EFT story about the most important person in my life: Andy. Andy started out as my best friend over a decade ago before he became my husband. He lights up my life and I would do anything within my power to help him.

For as long as he could remember Andy couldn’t bear to eat fruit. He would pop a piece of strawberry or other fruit in his mouth every so often but couldn’t stand the texture and would promptly spit it out. It was even worse with dried fruit. Andy would play a dance with his spoon to fish out the offending items from his bowl if ordered by accident.

Logically, Andy knew that fruit is an important part of a balanced healthy diet. For that reason, he really wanted to be able to eat it. But he just couldn’t bring himself to do so. This was additionally a torment to me as I adore all types of fruit, but was unable to buy in much variety as I couldn’t consume it all by myself. So for his sake and mine I really wanted to help him.

Over the years I’ve known Andy, I tried different ways of cooking, and presenting fruit but with no success. Through skill in cooking I helped him overcome his prior aversion to having any kind of seasoning in his food, but had got absolutely nowhere with his aversion to fruit. After I learnt EFT, I thought it worth a go. However, I’d had in mind Gary Craig’s suggestion to look for emotional drivers to a problem for the greatest potential for success, and so did some detective work first. I thought this was going to be a ‘hard case’ given all my previous efforts of solving the problem, and I wanted to be properly armed to give it a good first shot.

Whilst chatting with his mum, I learnt of an unusual incident when he was a baby. Andy was born with a hair lip and cleft palate. He had some excellent surgeons around at the time who over a number of operations did a great job on reconstructing his mouth. However, around the time he was six months old, shortly after coming round from one operation, the hospital nurses fed him apricot baby food. The acid in the food would have been very painful on a healing wound, especially on the tender tissues of a baby’s mouth. Andy’s mum reckoned that the episode was the reason he couldn’t eat anything with a pronounced flavour or odd texture. This was news to Andy – he had never heard the story before and found it a complete revelation.

We decided to give ourselves an hour to do EFT as the treatment could require diligence, and we were aware we might need more than one session. The first Setup I suggested was:

Even though I have this distaste of fruit, I deeply and completely accept myself

In the first round, something seemed to shift immediately in him, but we did a second round with ‘still’ and ‘remaining’ appropriately inserted. A few taps into the second round and his face relaxed into a grin. All of a sudden he couldn’t understand why he had this revulsion - it seemed just plain silly. He asked for some fruit. That was a first - Andy asking for some fruit. He liked the Clementine segment and polished the rest of it off. He snaffled a second one up too.

To both of us this was amazing, as we’d done less than 3 minutes of tapping. I guess the insight Andy’s mum had given him provided the bridge to getting to the root of the problem. Or perhaps, with the traumatic memory fresh in his mind he was able to easily neutralise it with EFT.

Shortly after that round of tapping Andy progressed to making delicious home made fruit smoothies. He wonders why he had a problem in the first place. 10 years on, Andy is still happy eating fruit.

With the initial tapping he noticed other changes to his palate. For example, he’s now able to enjoy instant black coffee, eat all manner of dry fruit, and is fine with raw veggies whereas he needed them cooked before.

We’ve also found subtle changes in other sensitivities that further tapping over the months has brought about. He used to find bright sunlight unbearable without sunglasses and would have endless sneezing fits if he ever got caught unprotected in sunshine. We’d been doing plenty of tapping on other issues, but never directly for this issue. However, he has gained an important borrowed benefit and can now be outdoors without desperately needing his sunglasses in most levels of sunlight.

It’s always a joy to help a loved one, though I now can’t keep all the mangoes for myself!

Sejual Shah is an EFT International Accredited Certified EFT Master Trainer and Advanced Practitioner in the UK. She helps execs with career growth and confidence issues. Since 2008 she has pioneered ways of delivering business EFT courses to large companies at home and abroad and loves coaching other practitioners to do this as well. She is the co-founder of Business Energetics. Her website is www.healthyinmind.com

From the EFTfree Archives, which are now a part of EFT International .
Originally published on Aug 9, 2014.

EFT International is committed to advancing and upholding the highest standards for education, training, professional development and promotion of the skilful, creative and ethical application of EFT (Emotional Freedom Techniques or "Tapping").

EFTi is a member of:

We use cookies on our website to give you the most relevant experience by remembering your preferences and repeat visits. By clicking “Accept All”, you consent to the use of ALL the cookies. However, you may visit "Cookie Settings" to provide a controlled consent.
Accept AllCookie SettingsPrivacy Policy
Manage consent

This website uses cookies to improve your experience while you navigate through the website. Out of these, the cookies that are categorized as necessary are stored on your browser as they are essential for the working of basic functionalities of the website. We also use third-party cookies that help us analyze and understand how you use this website. These cookies will be stored in your browser only with your consent. You also have the option to opt-out of these cookies. But opting out of some of these cookies may affect your browsing experience.
Necessary Always Enabled
Necessary cookies are absolutely essential for the website to function properly. These cookies ensure basic functionalities and security features of the website, anonymously.
Functional
Functional cookies help to perform certain functionalities like sharing the content of the website on social media platforms, collect feedbacks, and other third-party features.
Performance
Performance cookies are used to understand and analyze the key performance indexes of the website which helps in delivering a better user experience for the visitors.
Analytics
Analytical cookies are used to understand how visitors interact with the website. These cookies help provide information on metrics the number of visitors, bounce rate, traffic source, etc.
Advertisement
Advertisement cookies are used to provide visitors with relevant ads and marketing campaigns. These cookies track visitors across websites and collect information to provide customized ads.
Others
Other uncategorized cookies are those that are being analyzed and have not been classified into a category as yet.
SAVE & ACCEPT